To this date, there is extreme confusion among Muslims and non-Muslims alike regarding who was dictator Mustafa Kemal Ataturk, the destroyer of the Ottoman Caliphate and the desecrater of Islam in Turkey. 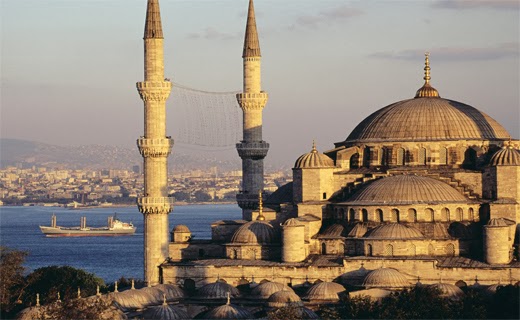 
During the end of the 18th century, the Ottoman rulers fell into the grievous sin of borrowing money on usury, from Jewish bankers based in Europe, a practice condemned in the Quran itself. This lead to financial takeover of the Ottoman empire by these bankers when the Ottomans were unable to pay their debts. These jewish bankers even approached the last Ottoman ruler Sultan Abdul Hamid with the offer to erase all his state debts in exchange for Palestine, an offer which was rejected. But the British, French, Russians and Jewish bankers were not the only ones eying the Ottoman empire.

(Above) From left to right: The Coat of arms of the Ottoman State, The Seal of the Sultan, The map of Ottoman Turkey & some poetry by Sultan Abdul Hamid II - the last Ottoman and the last Muslim ruler of Turkey (not shown here) which translates as:


My lord I know you are the Dear One (Al-Aziz)
... and no one but you is the Dear One
You are the One, and noting else
My God take my hand in these hard times
My God be my helper in this critical hour


The Abdication Of Abdul Hamid

Afterwards the Head Of The Ministers Council, Tawfiq Pasha was called to tell Abdul Hameed about the decision. He refused to do so. So they sent him a group of four people: Aref Hikmat, Aram Afandi (Armenian), As'ad Tobatani and Emanuel Qrasow (Jewish). As they entered his office, they found him standing calmly, Aref Hikmat read the Fatwa to him, then As'ad Tobatani came forward and said:

"The nation has removed you from your office."

Abdul Hamid became angry and said: "The nation has removed me from my office, that is okay ... but why did you bring the Jew to the Quarters of the Khilafa?" and he pointed to Qrasow (Emmanuel Karasu).

Obviously that was the point of payback, Abdul Hameed rejected selling Palestine to the Jews, and now they show him that they were a part of his removal. A challenge in the face of Abdul Hameed and the face of the Islamic Nation. (Source)


In December 1686, more than three hundred Jewish families converted to Islam in Salonica. Like Shabtai and other Marranos, they continued to attend Jewish services secretly and observed certain Jewish customs in their homes. .........

...... This was the origin of the most important group, numerically and historically, of Islamic Marranos. The Turkish Muslims called these hidden Jews 'doenmehs', the renegades. ..... Over the years the 'doenmeh' movement became firmly established in Asia Minor. In the nineteenth century the sect was estimated to have twenty thousand members. Salonica remained its main seat until that city became Greek in 1913. Although the Jewish community remained there under Greek rule, the 'doenmehs' moved to Constantinople. (Source)

What is important to know is that The Revolt of the Jews and Freemasons who disguised themselves under "Young Turks" started from Salonica and that is where dictator Mustafa Kemal Ataturk hailed from!


According to Sir Gerard Lowther: "The sect of Shabtai Zevi (Doenmeh) are Crypto-Jews who externally profess Islamism. Many of the former have in the past acquired Italian Nationality and are Freemasons affiliated to Italian Lodges." (Source)

... On the 1st May, 1909, the representatives of 45 Turkish Lodges met in Constantinople and founded the ‘Grand Orient Ottoman’. Mahmoud Orphi Pasha was nominated Grand Master... (Source)

The Freemason Grand Orient Ottoman Lodge has currently camouflaged itself as Naqshbandis, pseudo-Islamic esoteric cults and are still very active. All leaders following Ataturk were crypto-jews. The Orphi Pasha mentioned above was a strong opponent of Sultan Abdul Hamid. Muslims note that they have tampered with Quranic verses in their logo.


It was noticed that Jews of all colors, native and foreign, were enthusiastic supporters of the new dispensation, till, as a Turk expressed it, every Hebrew became a potential spy of the occult (Balkan) Committee, and people began to remark that the movement was rather a Jewish than Turkish Revolution... (Source)

Both confirm that the City of Constantinople fell to an army of between 70,000 and 80,000 occult Masonic Jews and 20,000 crypto-Muslim Jews, without a shot being fired. (Source)

Though Sultan Abdul Hamid displayed extraordinary administrative talent in reducing Turkey's debt, the "Young Turks" decided to have him deposed.

What follows was Mustafa Kemal's rule, which reveals a deep seated animosity for Islam, the like of which has not even been seen among Saddam and his atheist Baathists. It is important to know that till the abolition of the Caliphate, Mustafa Kemal always posed as a sincere and pious Muslim. Here are some activities conducted by Jewish dictator Mustafa Kemal right after he seized power in Turkey:

1. Stating that "We do not receive our laws from the sky" referring to Quran.
2. Changed mosque prayer mats to wooden pews, to obstruct the Muslim style of prayer.
3. Banned the traditional and immensely popular Turkish hat, banned women from wearing the veil.
4. "Philosophic training" for mosque preachers.
5. Wearing of shoes in mosque, as opposed to the tradition of taking off shoes.
6. Attempted installing musical choirs in places of worship.
7. Tried to change the original "Allahu Akbar" (God is great) to "Tanri Uludur!" (Turkish translation) during calls for prayer.
8. Was quoted as saying " Islam, this theology of an immoral Arab (referring to Prophet Mohammad[pbuh]), is a dead thing. Possibly it might have suited tribes of nomads in the desert. It was no good for a modern progressive State."

And lots more... Please browse the site for others.

Sabbati Zevi claimed 1666 (note the 666) as the millennium he came as a messiah for the jews. He was a Kabbalah scholar.

Recently, new evidence has surfaced that Mustafa Kemal was not only a non-muslim doenmeh, but a secret Jewish descendant of Jewish false prophet Shabtai Zevi! The evidence comes not from tracing his genealogy, but from a statement he himself made. Check out the following article...

(Sounds so typically Jewish, doesn't it? Earlier, a jewish whore by name Roxelana had managed to become wife of Suleiman the Magnificent. She changed her name to Hurrem Sultana and conducted devastating conspiracies to make her son the heir to the throne... a conspiracy which failed!)

Note that the same Doenmeh Crypto Jews still run Turkey like a province of Israel, and with extreme brutality. Turkey never needed Cyprus, but the invasion was conducted so that Israel could also use the island which is strategic for its defense.

Progress made by Turkey since the Jewish takeover includes:

1. From global power to 'sick man of Europe' begging for entry into European Union.
2. From protector of the Holy Land to pimp of Israel and puppet of USA and EU in the middle-east.
3. From making its own indigenously developed fighter planes at beginning of WW1 (first non Europeans) to making ugly-ass ex Soviet Tatras.
4. And so on...