According to Aziz Nesin, Mustafa Kemal was a Donmeh Jew. This information comes from 131. and 257. pages of Aziz Nesin's book Böyle Gelmiş Böyle Gitmez (English Trans. Istanbul Boy: The Autobiography of Aziz Nesin).


"At home, we used to talk against Mustafa Kemal. Mustafa Kemal's real origin was Jewish. He was a Donmeh Jew. One of his eyes was blind. If you look at his pictures carefully, you will notice one of his eyes was of glass.. Mustafa Kemal was going to abolish Islam completely." (Source: Aziz Nesin, Böyle Gelmiş Böyle Gitmez (autobiography), Düşün Publishing, Istanbul 1966, page 131)


"We started hearing things like '..after now on, the Fez will no longer be worn, the western hat will be worn instead. It is against the law to wear the Fez..' My dad used to get very angry, infuriated at that. Neither Mustafa Kemal's blindness nor his Donmehness is left now.. My dad no longer pronounced Mustafa Kemal's name. He referred to Mustafa Kemal as 'blind' only.." (Source: Aziz Nesin, Böyle Gelmiş Böyle Gitmez (autobiography), Düşün Publishing, Istanbul 1966, page 257) 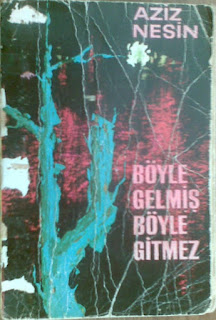