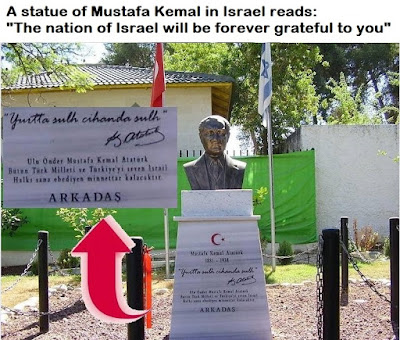 The above monument of Mustafa Kemal and the tablet is erected in Israel to this day. The inscription on the tablet, which is written in Turkish, roughly translates into English as:

"Great leader Mustafa Kemal Ataturk
The whole Turkish nation and the nation of Israel who loves Turkey, will be forever grateful to you"

The monument is erected at the yard of an association called "Arkadash" which means "Friend". The Arkadash Association is located in Yehud-Monosson, Israel and it was founded by Eyal Peretz in 2003. The association purports to preserve Turkish Jewish heritage and promote friendship between Israel and Turkey.